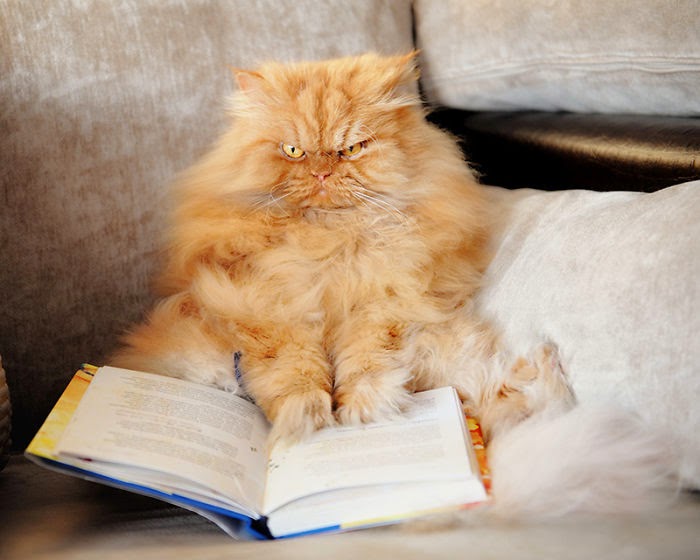 I AM THIS CAT.
I feel like I should start every post with that picture.
Oh, god.  You have no idea what's in store this time around.  Bad Cheryl is going to give some writing advice and I am going to lose my fucking mind.  Do whatever you need to do to mentally prepare yourselves for everything that follows.  Honestly, nothing will prepare you, but tequila might help.
Letter #7
﻿
The letter will be in bold, italicized type.  The comments I will be unable to refrain from making will be in regular type.  Let's do this.

I write like a girl.  I hate you already.  I write about my lady life experiences, and that usually comes out as unfiltered emotion, unrequited love, and eventual discussion of my vagina as metaphor.  Please stop writing right now.  And that's when I can write, which doesn't happen to be true anymore.  Thank god.

Right now, I am a pathetic and confused young woman of twenty-six, a writer who can't write.  I totally agree with everything you just said.  I am up late asking you a question, really questioning myself.  I've sat here, at my desk, for hours, mentally immobile.  I bet.  I look up people I used to love and wonder why they never loved me.  I lie facedown on my bed and feel scared.  I get up, go to the computer, feel worse.  That's probably because you write things like this.

David Foster Wallace called himself a failed writer at twenty-eight.  You are no David Foster Wallace.  Several months ago, when depression hooked its teeth into me, I complained to my then-boyfriend about how I'll never be as good as Wallace; he screamed at me on Guerrero Street in San Francisco, "STOP IT.  HE KILLED HIMSELF, ELISSA.  I HOPE TO GOD YOU ARE NEVER LIKE HIM."  Don't worry, then-boyfriend.  Elissa will never be like DFW.  Also, the mention of Guerrero Street in San Francisco really added something special to the story.  I'm glad that was in there.  It's the sort of useless fact Cheryl Strayed likes to pepper into her stor--  hmmmm.

Can it?  YES.  I want to jump out the window for what I've boiled down to is one reason: I can't write a book.  The window is right over there.  But it's not that I want to die so much as have an entirely different life.  I start to think that I should choose another profession-- as Lorrie Moore suggests, "movie star/astronaut, a movie star/missionary, a movie star/kindergarten teacher."  I've never heard of Lorrie Moore, but none of that bullshit made any sense.  Good job all around, everybody.  I want to throw off everything I've accumulated and begin as someone new, someone better.

I don't have a bad life.  I didn't have a painful childhood.  I know I'm not the first depressed writer.  Go fuck yourself, Elissa.  "Depressed writer"-- because the latter is less accurate, the former is more acute.  Learn how sentences work.  I've been clinically diagnosed with major depressive disorder and have an off-and-on relationship with prescription medication, which I confide so it doesn't seem I throw around the word "depression."  First of all, anyone with a pulse can get prescription medication, you fucktard.   You're not special.  Secondly, while I'm no doctor, I suspect the vague term "major depressive disorder" is synonymous with "nothing actually wrong, but asshole patient can't get over the fact that she's a shitty writer," so whoa, yeah, big problem you got there.  Sounds serious.  Lastly, you actually seem to enjoy throwing the word "depression" around.  You've used "depressed" or "depression" six times now.  Eat a bag of dicks.

That said, I'm high-functioning-- a high-functioning head case, one who jokes enough that most people don't know the truth.  I bet you're super funny.  The truth: I am sick with panic that I cannot-- will not-- override my limitations, insecurities, jealousies, and ineptitude, to write well, with intelligence and heart and lengthiness.  Your panic is justified.  And I fear that even if I do manage to write, that the stories I write-- about my vagina, etc.-- will be disregarded and mocked.  Oh, come now.  I bet "Elissa's Vagina" will be a New York Times bestseller.

How do I reach the page when I can't lift my face off the bed?  How does one go on, Sugar, when you realize you might not have it in you?  How does a woman get up and become the writer she wishes she'd be?


Holy shit, this dumbass used her real name.  You know how I feel about fact-checking, so it goes without saying that I immediately Googled the shit out of Elissa Bassist.  As it turns out, she has her very own website.  She has a bunch of tabs on the top of her page, one of which is "Books Published."  I clicked on it.  Here's a screenshot of what happened when I did that: 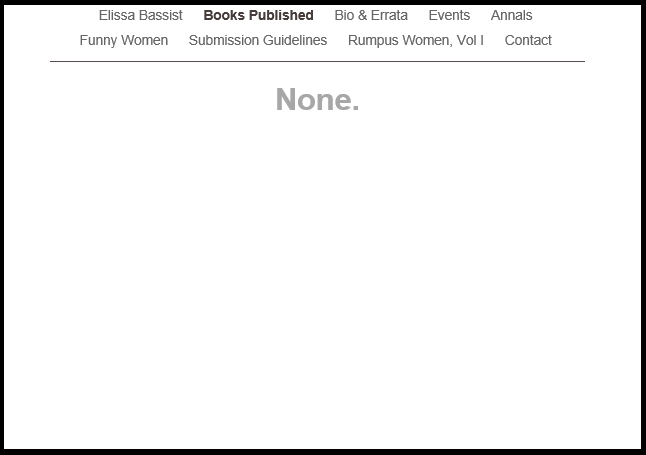 This is when I howled with laughter and couldn't stop for a good five minutes.  I guess Bad Cheryl's super awesome advice didn't do one or two or even three bits of good for Elissa Bassist.  Let's see what she had to say to Elissa.
(Please note, it takes Bad Cheryl THREE FUCKING PAGES to write anything that even starts to resemble advice.  She needs to talk about herself first because Cheryl Strayed.)
Let's get on with it.
Bad Cheryl starts with,

"When I was twenty-eight I had a chalkboard in my living room.  It was one of those two-sided wooden A-frames that stand on their own and fold flat.  On one side of the chalkboard I wrote, 'The first product of self-knowledge is humility,' Flannery O'Connor, and on the other side I wrote, 'She sat and thought of only one thing, of her mother holding and holding onto their hands,' Eudora Welty."


What is with this woman's giant boner for Flannery O'Connor.

"The quote from Eudora Welty is from her novel The Optimist's Daughter, which won the Pulitzer Prize for Fiction in  1972.  It was a book I read again and again, and that line about the woman who sat thinking of only one thing was at the heart of the reason why.  I sat like that too."

--except not, because Bad Cheryl doesn't understand what "only one thing" means--


"Thinking of only one thing."

That's not a sentence.

"One thing was actually two things pressed together, like the back-to-back quotes on my chalkboard: how much I missed my mother and how the only way I could bear to live without her was to write a book.  My book.  The one that I'd known was in me since way before  knew people like me could have books inside of them.  The one I felt pulsing in my chest like a second heart, formless and unimaginable until my mother died, and there it was, the plot revealed, the story I couldn't live without telling."


"Without a book, but not entirely without literary acclaim."


She's too amazing for failure.  I'm in awe.  She then brags about how she "read voraciously" and "practically memorized the work of writers" she loved.  In a display of modesty, she explains,


"I recorded my life copiously and artfully in my journals."


She finishes up the paragraph with,

"I wrote stories in feverish, intermittent bursts, believing they'd miraculously form a novel without my having to suffer too much over it."


This sentiment sounds so familiar...

"As I hiked, I pondered the ice ax that would be in my resupply box.  The ice ax that allegedly belonged to me.  It was black and silver and dangerous-looking, an approximately two-foot-long metal dagger with a shorter, sharper dagger that ran crosswise at the end.  I bought it, brought it home, and placed it in the box labeled Kennedy Meadows, assuming that by the time I actually reached Kennedy Meadows I would know how to use it-- having by then been inexplicably transformed into an expert mountaineer."

--Wild, Chapter 6, page 89
Why does this woman think that she is under no obligation to put forth any effort in any circumstance?  Why does she seem to be under the impression that things should just magically happen?
Oh, wait.  I spoke too soon.  She has an epiphany.

"As my thirtieth birthday approached, I realized that if I truly wanted to write the story I had to tell, I would have to gather everything within me to make it happen.  I would have to sit and think of only one thing longer and harder than I thought possible.  I would have to suffer.  By which I mean work."

She then spends three paragraphs writing sentence fragments until,

"In short, I had to gain the self-knowledge that Flannery O'Connor mentions in that quote I wrote on my chalkboard.  And once I got there I had to make a hard stop at self-knowledge's first product: humility."

HOW AM I STILL ALIVE.

We're then treated to a Latin lesson on the origin of the word humility and I'd totally tell you all about it, but I'm busy sponging my brains off of the wall.

She spends a couple paragraphs explaining how she's pretty much the best at being humble and starts the next paragraph with,

"I hope you'll think hard about that, honey bun.  If you had a two-sided chalkboard in your living room I'd write humility on one side and surrender on the other for you."

"The most fascinating thing to me about your letter is that buried beneath all the anxiety and sorrow and fear and self-loathing, there's arrogance at its core."

Blah, blah, blah, then she tells Elissa that she probably won't be taken seriously as a writer because she's a girl and what the fuck.  She follows with,

"It's still true that literary works by women, gays, and writers of color are often framed as specific rather than universal, small rather than big, personal or particular rather than socially significant."

WHAT?
I don't even.  She finally gets to something that could pass for advice, and she fucks it all up:

"Write so blazingly good that you can't be framed."

"Writing is hard for every last one of us-- straight white men included.  Coal mining is harder.  Do you think miners stand around all day talking about how hard it is to mine for coal?  They do not.  The simply dig." 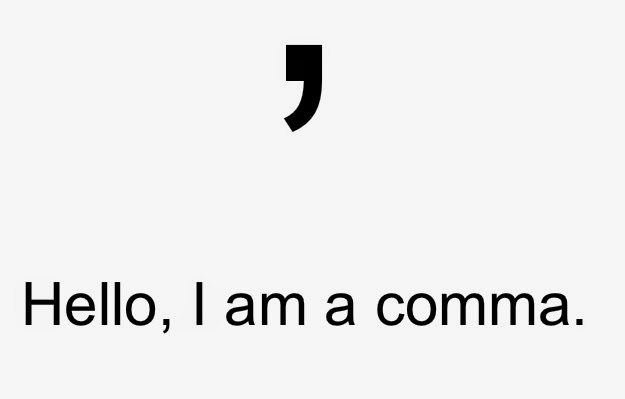 WE'VE NEVER MET BEFORE.
She finishes everything with,


That's it?  Write good and write like a motherfucker?  Good luck with that advice, Elissa.  Can't wait to read about your vagina.
Posted by Califohioan at 8:42 PM