Letter #5 was so incredibly stupid that I couldn't deal with it.  Maybe I'll circle back and cover it at some point, but probably not.  Here, let me sum it all up for you:


Bad Cheryl then spends eight goddamned pages talking about herself, her dead mom, her supposedly horrible father and she sorta answers Some Asshole's dumb question at some point, but not really.  The End.

Not worth our time, people.  Trust me.  Let's move on.


Paraphrasing is fun, but sometimes I feel like you should read these questions for yourselves.

Here it is in its glorious entirety:

I'm in my early twenties.  I've been in a serious relationship with the same guy for six years-- on and off (the "off" portion taking place when I was younger).  I have been very distracted and have been second-guessing the relationship for a while now, but I can't come to grips with losing this person that seems to be right for me permanently-- and of course I don't want to break his heart.  Then again, I don't want to settle and have regrets later in life.  I feel like we want different things out of life and we have different interests, but I just can't decide.  I have talked to him about my feelings, but to no avail.  We went on a little "break," but breaks never work.

My biggest fear is being alone and never finding anyone that measures up.  It doesn't help that my closest friends are settling down with their boyfriends and are talking about marriage.  Please help, Sugar!


[sic] <--- Is this not a thing anymore?  Have we finally achieved a level of (borderline) illiteracy that allows for grammatical errors to go unchecked?  'Merica.
﻿ 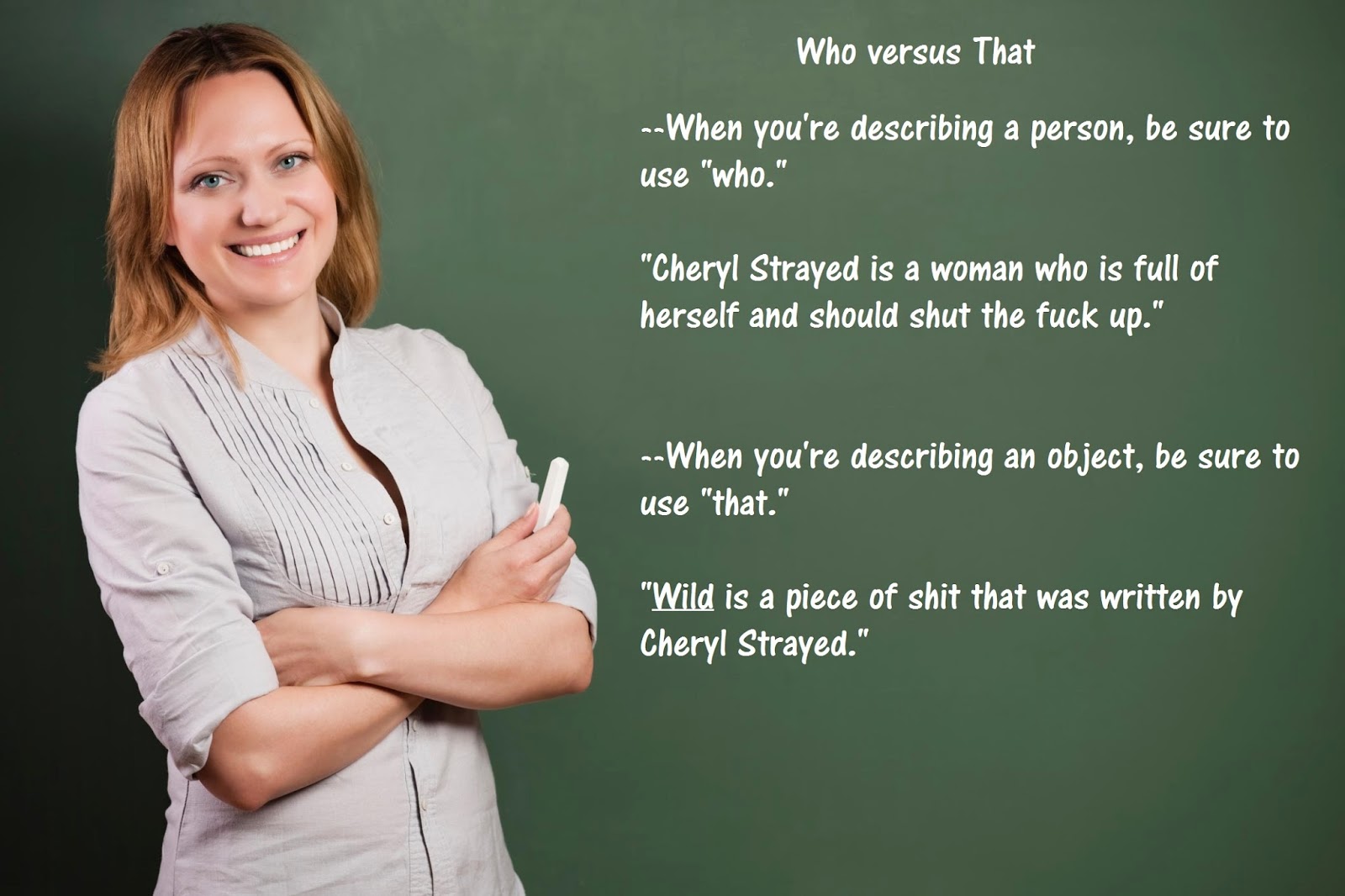 See how that works?  I should be a teacher.
﻿
﻿
Okay, let's start by pointing out that Scared and Confused didn't ask a question.
"Please help!"
=Not a question.
Whatever.  Let's explore Bad Cheryl's response.  With no preface whatsoever, she begins her profoundly wise response with,

"I lived in London when I was twenty.  I was technically homeless and desperately broke, but I didn't have the papers an American needs to get a job in London, so I spent most of my time walking the streets searching for coins that people had dropped.  One day, a man in a business suit approached me and asked me if I wanted an under-the-table job three days a week at a major accounting firm that has since collapsed due to corruption.

"And this is how I became coffee girl one two three."


I don't know what this has to do with anything, but we can tell already that this is gonna be super insightful.

"Coffee girl was my actual job title.  The one two three was tacked on to communicate the fact that I was responsible for providing fresh and hot coffee and tea to all the accountants and secretaries who worked on the first three floors of the building.  It was a harder job than you might think."


No, it probably wasn't, but okay.  She then goes on to describe her coffee girl outfit because apparently this detail is imperative in helping Scared and Confused figure out her relationship issues.  Then,

"...and I was almost always out of breath.  Banned from the elevator, I had to race up and down steps in the back stairwell that ran along the back of the building to get from one floor to the next."


Let me get this straight.  Your whole job was to deliver hot beverages to everyone on the first three floors of an office building and for reasons left unexplained, you were banned from the elevator?  Did you take a dump in there on your first day?  I don't understand.

"During my breaks I walked down to the first floor and went outside and sat on a patch of concrete that edged the building that housed the major accounting firm that has since collapsed due to corruption."


Yes, we got it.  You already mentioned the fact that this unnamed accounting firm would collapse due to corruption.  In fact, you used the exact same words the first time.

One day, an old lady came along and had such a nice little chat with Bad Cheryl that she apparently made a point to show up every single day just to enjoy Bad Cheryl's company because of course she did.  Who wouldn't?

"She wasn't the only person who came to talk to me.  I was in love with someone at the time.  In fact, I was married to that someone.  And I was in way over my head.  At night after I made love to this man I would lie beside him and cry because I knew that I loved him and that I couldn't bear to stay with him because I wasn't ready to love only one person yet and I knew that if I left him I would die of a broken heart and I would kill him of a broken heart too and it would be over for me when it came to love because there would never be another person who I'd love as much as I loved him or who loved me as much as he loved me or who was as sweet and sexy and cool and compassionate and good through and through." 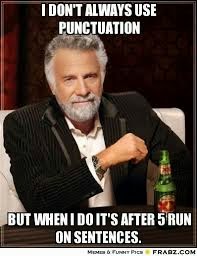 What the fuck was that.  The paragraph isn't over, though--

"So I stayed.  We looked for coins on the streets of London together.  And sometimes he would come and visit me at the major accounting firm that has since collapsed due to corruption while I was on my breaks."


STOP SAYING THAT.  GODDMANIT.  NO ONE CARES.  Also, what the hell is this repeated crap about looking for coins on the streets?  This is ridiculous.  I've typed every variation of "where the fuck did Cheryl Strayed live in London" into Google and I can't find anything.  She says she was "technically homeless," which means "not homeless."  How many coins did these two assholes find on the street?  I'm moving to London.  The streets are apparently littered with discarded money.  Here's a close-up Google Maps image of Oxford Street: 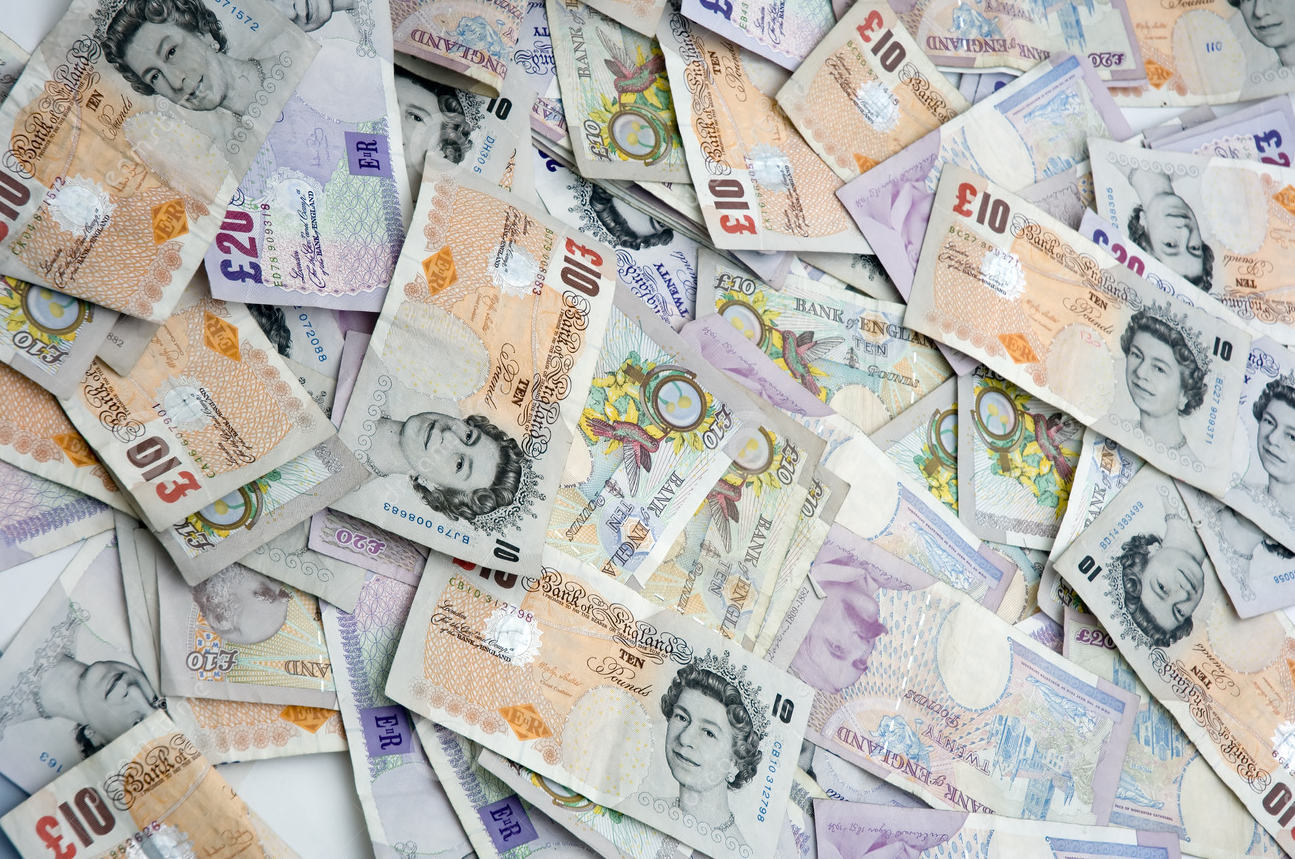 Oh, christ.  Anyway, her husband shows up one day after what we can only imagine was a productive morning of picking oodles of money off the street and the old lady is sitting with Bad Cheryl.  They say hello and stuff and then the old lady walks away.

"The man I loved was silent for a good while, giving the old woman time to walk away, and then he looked at me and said with some astonishment, 'She has a bundle on her head.'

"That old woman, all that time, all through the conversations we'd had as I sat on the concrete patch, had had an enormous bundle on her head.  She appeared perfectly normal in every way but this one: she wore an impossible three-foot tower of ratty old rags and ripped-up blankets and towels on top of her head, held there by a complicated system of ropes tied beneath her chin and fastened to loops on the shoulders of her raincoat."

Only Cheryl Strayed could be so self-absorbed to have failed to notice a fucking garbage heap sitting atop a woman's head.

It only gets worse--

"She has a bundle on her head! we shrieked to each other through our laughter on the patch of concrete that day, but before long I wasn't laughing anymore.  I was crying.  I cried and cried and cried as hard as I'd laughed.  I cried so hard I didn't go back to work.  My job as coffee girl one two three ended right then and there."


This woman hosts writing workshops.  She charges up to THREE THOUSAND FIVE HUNDRED AND FIFTY DOLLARS.  She will teach you how to write and write and write.

"I was crying because there was a bundle on the old woman's head and I hadn't been able to say that there was because I knew that that was somehow connected to the fact that I didn't want to stay with a man I loved anymore but I couldn't bring myself to acknowledge what was so very obvious and so very true."

YOU KNOW WHY.
Let's see how Cheryl ties all of this bullshit into anything to do with Sacred and Confused's "question."

"That was such a long time ago, Scared & Confused, but it all came back when I read your letter.  It made me think that perhaps that moment delivered me here to say this to you:  You have a bundle on your head, sweet pea.  And though that bundle may be impossible for you to see right now, it's entirely visible to me.  You aren't torn.  You're only just afraid.  You no longer wish to be in a relationship with your lover even though he's a great guy... The end of your relationship with him will likely also mark the end of an era of your life.  In moving into this next era there are going to be things you lose and things you gain.

"Trust yourself.  It's Sugar's golden rule.  Trusting yourself means living out what you already know to be true."

I guess since Scared and Confused didn't really pose a question, she deserved this response.

I'm tired and confused.  I'm going to bed.
Posted by Califohioan at 7:38 PM