We left off with Cheryl rubbing her naughty bits and fantasizing about Jonathon, the random guy she met at the club, while simultaneously declaring that "under no circumstances" would she take her pants off on her upcoming date with Jonathon, further proving that everything she says is a lie.

She wakes up and spends the whole fucking day obsessing over the date and "imagining the things we might do," stressing again, "with my pants still on," and who does she think she's kidding.

It's finally almost date time, so she goes to the co-op to abuse their sample section again, puts on some lipstick that sounds just awful-- "Plum Hazel"-- and douses herself in some perfumed oil before heading to the club.

There's a "fairly famous bluegrass band from the Bay Area" playing at the club and Cheryl neglects to mention the name of the band because that's the sort of thing that could easily be looked up and we can't have that.  Cheryl then spends an obscene amount of time acting like a 14-year-old and since I had to read this pap, you're gonna read it, too.

She doesn't look at him "for three whole songs" until she "couldn't take it anymore," and holy fuck, Jonathon waves at her.

Good job.
Then this happens:

"I turned away and stood extra still and upright, acutely aware of myself as an object of hot and exquisite beauty,"


and are you fucking kidding me.  But wait, Cheryl starts to second-guess her exquisite beauty, calls herself "a hideous beast," points out how she has a fat belly, recognizes that her lipstick color is ridiculous and generally has a complete body-image meltdown and this is probably one of those passages where all of her stupid fans were all, "I totally get how you feel, you're so awesome, omg," while my response to this very same passage was, "Please die."

The band takes a break and Jonathon shows up long enough to suggest that after he gets off work, they should go to his "organic farm about fifteen miles from here," and what woman would agree to be driven fifteen miles into the middle of nowhere at night by a strange man.  Answer: Cheryl Strayed.

Cheryl decides to leave the club until Jonathon's shift is over and thank god for that because I can't take another second of her juvenile bullshit about who's-looking-at-whom.  Unfortunately, things get just as stupid outside.

Cheryl "walked giddily out into the night" because omg, a boy is interested in her and she's such an awesome feminist.  As she's assumedly skipping around in little circles like an asshole, some bearded mountain man approaches her and introduces himself, saying that his name is Clyde, he lives in a tepee in the mountains and he would very much like to have a cup of tea with Cheryl in his "old milk truck" that is also his house.  Once again, no woman would agree to do this, but Cheryl jumps at the opportunity to get into a strange man's milk truck house to drink a beverage he's going to prepare for her because that sounds super safe.

"I kicked off my new sandals and lay across the bed,"


and jesus, why not just scrawl "I'm Asking For It" on your forehead and whip your pants off as long as you're making yourself at home.  I can't believe this woman.

They almost have a discussion about reincarnation but Cheryl's too dumb to have anything interesting to say, and that's when Clyde pulls out some "chewable opium" which big heroin addict Cheryl immediately shoves into her maw before having what resembles an intelligent thought:

"It took a moment for me to realize that maybe it would be best to steer entirely clear of opium, or any other root that a strange man gave me, for that matter, regardless of how nice and non-threatening he seemed."

What is wrong with you.  Really.  What.
Don't worry, everybody.   She leaves unharmed and I throw my copy of the book against the wall four or five times while shouting obscenities until Jonathon gets off work and DATE TIME!
Stupid Cheryl gets into Jonathon's car so they can go to his farm and everything about this seems totally safe.

"He turned down one road and another until I had absolutely no sense of where I was,"


and am I the only one who's wondering how long it's going to take before it puts the lotion on its skin or else it gets the hose again.  Oh, if only.  Anyway, they finally arrive at Jonathon's "organic farm" and it turns out that Jonathon doesn't actually have a house, but rather "a large boxy tent that was erected on a wooden platform" and whatever, sure.

They start talking about music and that's when Jonathon says that he's seen Michelle Shocked three whole times and Cheryl is super impressed with this.

"'Wow,' I said, realizing there was no way I was going to keep my pants on with a man who'd seen Michelle Shocked three times,"


and shut the fuck up, Cheryl.  He could have said pretty much anything and you would have had the same reaction. 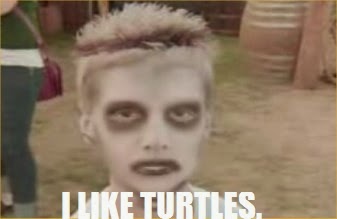 "'Wow,' I said, realizing there was no way I was going to keep my pants on with a man who liked turtles."
They have a super deep conversation:

"'Wow, he said back to me, his brown eyes finding mine in the dark.


Jesus Christ, I almost wish they would start banging already just so the dialogue will stop.  They stand outside for god knows how long and he says "rad" and Cheryl says "rad" and then Cheryl demonstrates her awesome writing skills: "we stood there kissing and kissing" until Jonathon finally leads her into his house tent and then ARE YOU FUCKING KIDDING ME, NO ONE HAS A CONDOM.  What.  The.  Fuck.  We've been reading about her goddamned condoms for chapters on end now and she didn't bring the fucking condom with her.  Jonathon doesn't have one, either, and this is just so shocking, I can't believe a man who lives in a tent and has also seen Michelle Shocked three times isn't getting tons of ass left and right.  They deal with the situation.

"'It's okay,' he whispered, taking both of my hands into his.  'We can just hang out.  There are a lot of things we can do, actually.'"


and HOW THE FUCK IS THIS A BEST-SELLING BOOK.  HOW.

Cheryl takes her shirt off and shows off her new bra and Jonathon pretends to be impressed with the bra even though he's a guy and guys really don't give a shit about bras.  They care about what's in the bra.  He apparently spends goddamned forever running his fingers over her stupid bra and, oh god, please someone kill me.

"By the time he'd finished outlining the whole thing, he'd barely touched me and yet I was so wet I could hardly stand up."


Gross.  They kiss and dry-hump or whatever and then take a break long enough to compare ages because that's totally what everybody does in the middle of making out.  Jonathon is thirty-four and we know Cheryl is twenty-six, and get a load of this nonsense:

"Like in spite of the fact that he'd failed to ask me anything about myself, at least I was in bed with a man who wasn't a boy anymore."

They keep making out, Cheryl finally admits her insecurity about her rough skin patches, Jonathon doesn't give half a shit, they make out some more and do god knows what (we are thankfully spared the details) and despite desperately wanting to be done with this chapter, I can't deal with this anymore today.
Posted by Califohioan at 8:15 PM