Part Thirty-Seven of a review of "Wild: From Lost to Found on the Pacific Crest Trail," Chapter Seventeen, Part Three: Cheryl Gets Not Raped


Cheryl starts hiking the morning after the storm nothing and says she "missed a fork in the trail" and is no longer on the PCT even though that doesn't really make sense.  You can take the wrong path at a fork, but you can't really miss a fork unless you're going out of your way to not pay attention because it's a fork and goddamnit, apparently we can add "forks" to the limitless list of things Cheryl doesn't understand.  I don't know, maybe she missed it while she was busy skipping along and keeping an eye out for Bigfoot and trying to figure out how the sky works.  It's possible.  Who even gives a shit at this point because none of this happened.

She's totally unconcerned with the fact that she's not on the trail anymore because she's an expert hiker and will undoubtedly find her way back to the trail.  She does her stupid hopscotch thing again (which I've been sparing you, but fuck it, deal with this)--


"Hop, skip, jump, done."
--and just shut the fuck up already.  She claims to encounter "a trio of enormous elks" and I don't believe this for a second because she doesn't scream, "PANDAS!" upon seeing them.
She stops to make camp in the evening near a pond and get ready for the big bag of bullshit that takes up the rest of the chapter, and by "get ready," I mean, go pour yourself a Big Gulp of scotch or vodka or whiskey or nail polish remover, down the whole thing like it's water, sit (or fall) down, wait for the impending blackout, and hope like you've never hoped before that you immediately have to be rushed to the hospital for alcohol poisoning in order to avoid having to read all this.  Are you ready?  Did you do what I suggested?  You didn't, did you.  I was trying to be helpful and you disregarded my good advice.  Well, that's your own fault, so don't blame me.
"Only moments" after she stops to make camp, "two bow hunters" appear. They are desperate for water and this doesn't make any sense, but we'll get to that in a minute.

"'You got any water?' one of them burst out immediately.

"'We can't drink the pond water, can we?' asked the other, the desperation apparent on his face."

Is this their first time outside?  Who thinks they can drink pond water?

"They both looked to be in their mid-thirties.  One man was sandy-haired and wiry, though he had a little belly; the other was a redhead tall and meaty enough to be a linebacker.  They both wore jeans with big buck knives hitched onto their belts and enormous backpacks that had bows and arrows slung across them."

Redhead talls are my favorite kind of men.
﻿Cheryl tells them that they can drink the pond water as long as it's run through a filter first and these two men are all what's-that-we-don't-have-one-of-those.  I see a couple holes in this story already and it's only just begun.  She offers to let them use her filter and I also don't believe this, but let's just go with it, right?  It'll make things more interesting.
Sandy takes the filter over to the pond and I guess he tries sticking it in his ear or something because he asks, "How do you use this thing?"  Before Cheryl attempts to (poorly) explain how to use it, she tells us that the men are only "up for the day hunting" and that their truck is parked three miles away.  Since Cheryl doesn't understand how miles work, she acts like they're in a dire situation and asks them if they've gone the whole day without drinking.

"'We brought Pepsi,' the sandy-haired man answered. 'We each had a six-pack.'"


It takes DAYS before a person will die from dehydration, and these tools apparently drank a six-pack of Pepsi EACH during that day, which means that they are both stupid, but fine.  While I imagine they may possibly have been thirsty, they were not in any sort of life-threatening position, especially given that their truck was three fucking miles away= less than an hour walk.

"'We're headed back down to our truck after this, so we only need enough water to get us another bit, but we're both dying of thirst,' the red-haired man said."

No, you're not.
Hey, look, Cheryl found another person who measures things in bits.  She gives them what little water she has left in her bottle and complains about having to help people.

"I felt sorry for them, but I was sorrier that they were here with me.  I was exhausted.  I ached to take off my boots and change out of my sweaty clothes, pitch my tent, and make my dinner so I could lose myself in The Ten Thousand Things."


Oh, boo-hoo, the world isn't revolving around you for a minute.  Better fix that!

"Plus, I got a funny feeling from these men, with their Pepsi and their bows and their big buck knives and the way they'd stormed right up to me."

Since Cheryl didn't bother to explain how to use the water filter very well, Sandy apparently just sticks it in some mud, attempts to pump water and breaks the filter.  Cheryl reprimands him for not following the directions she didn't give him and he is not apologetic.  Redhead Tall starts going Full Cheryl because he's "got to get something to drink," and jesus christ, just walk 45 minutes to your truck and drive to a store.  You'll make it, I promise.

Cheryl fills their empty Pepsi cans with pond water, pops in some iodine pills, tells them that the water will be safe to drink in thirty minutes and then hopes that they'll leave, but they don't.  Sandy wants to make conversation and is all heywhatchadoin and stuff, except Cheryl has to make it sound super rapey while also reminding us how beautiful she is, and Robin Desser clearly couldn't stand reading this garbage by chapter 17 and gave up.

"'So, what are you doing out here all by yourself?' asked the sandy-haired man.

"'I'm hiking the Pacific Crest Trail,' I said, and instantly wished I hadn't.  I didn't like the way he was looking me, openly appraising my body.

"I didn't like the way he was looking me?"  Robin, you're not even trying anymore.
Openly appraising her body, huh?  Rawr.  Sandy goes on to say,

"'I can't believe a girl like you would be all alone up here.  You're way too pretty to be out here alone, if you ask me.'"


Of course he says this.  Overcome by Cheryl's exquisite beauty, he can't help but to continue.

"'I don't believe that a young thing like her could be out here by herself, do you?' he said to his red-haired friend, as if I weren't even there."


He can't stop himself; he must say more things.

"'She's got a really nice figure, don't she?' the sandy-haired man said.  'Healthy, with some soft curves.  Just the kind I like.'"

Why is he talking like the mountain men from "Deliverance" all of the sudden?
What the fuck is this guy talking about.  Let's remember what Cheryl looked like at this point: 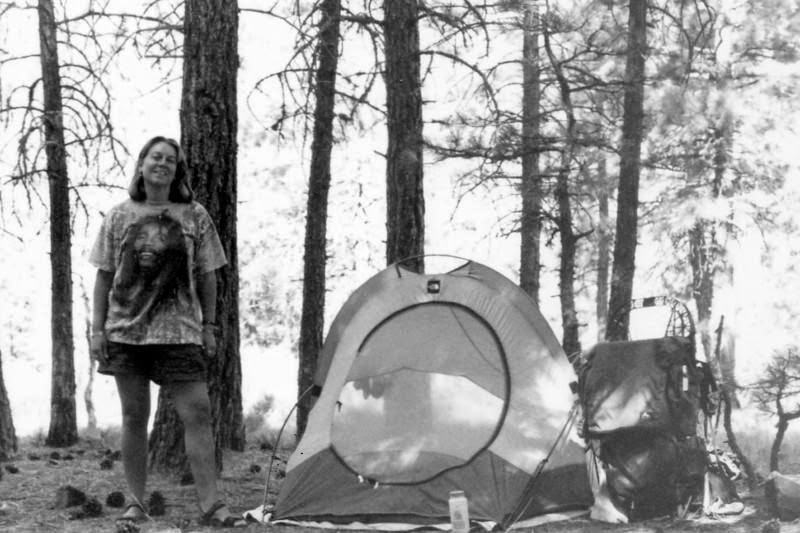 What curves?  Is he referring to her wrist fat?
Cheryl is super uncomfortable with all this talk about her beauty and lies to Sandy and Redhead Tall, telling them that she's gonna keep hiking and bye now!  She pretends to start packing up, they leave and whew, that was super close, something almost happened except it didn't because nothing ever happens.
She starts unpacking, boils some water on her stove and changes clothes, which she describes as such:

"I peeled off my sweaty clothes, pulled out my red fleece leggings and long-sleeved shirt, and dressed in them."

Thanks.  She starts to put her tent up and--
OMG, SANDY.  HE'S BACK.
Cheryl is terrified.

"It was as if I'd finally come across a mountain lion and I'd remembered, against all instinct, not to run.  Not to incite him with my fast motions or antagonize him with my anger or arouse him with my fear."


And what the fuck is this twat talking about.  Potential (non)rapists are not like mountain lions; they will not be "incited by fast motions."  I'm sort of surprised she doesn't start singing songs to scare him off because that totally works on bears and Bigfoot.

Sandy points out that she had told him that she was going to be moving on and he doesn't like the fact that she lied.

"'You changed your clothes, too,' he said suggestively, and his words expanded in my gut like a spray of gunshot.  My entire body flushed with the knowledge that when I'd taken off my clothes, he'd been nearby, watching me.

"'I like your pants,' he said with a little smirk.  He took off his backpack and set it down.  'Or leggings, if that's what they're called.'"


What man corrects himself to say leggings.  What man.  Anyway, Cheryl's pretty much shitting her pants leggings at this point and can't form words, so Sandy keeps talking to end the awkward silence.

"'I'm talking about your pants,' the man said with a touch of irritation.  'They look good on you.  They show off your hips and legs.'"


And no man talks like this, but whatever.  Cheryl needs all of her young, naïve readers to understand that Sandy is interested in her pudendum (or "pudenda," since Cheryl has more than one vagina).   Cheryl is in full survival mode now and mentally assesses all of her defense options: the world's loudest whistle, the Swiss army knife she can't get to, the "not-yet-boiling water in the handleless pot" on her stove, and finally decides that her best option is an arrow.

"If he tried to do anything to me, I'd get to one of those arrows and stab him in the throat."


Sandy continues to not rape her or do anything but just talk to her and thank goodness, Redhead Tall shows up to save the day, irritated with Sandy because he had to come back to find him, which makes no sense because they left together and-- I don't even care anymore.  None of this happened.  I'm not going to try to make sense of it.

Sandy and Readhead Tall leave, and Cheryl goes beyond Full Cheryl.  She packs up camp and, you'll never believe this, she "walked and walked."  She walks until she can't walk anymore, and ends the chapter with,

Posted by Califohioan at 7:42 AM