Part Thirty-One of a review of "Wild: From Lost to Found on the Pacific Crest Trail," Chapter Fifteen, Part Two: OMG, Cheryl Has a Date


We left off with Susanna from Switzerland about to massage Cheryl's feet because that's the sort of thing that happens if you're Cheryl Strayed or a person who can't differentiate between lame fantasies and reality.  I neglected to mention Cheryl's brand new necklace in my last post because my bullshit threshold has its limits and I just couldn't deal with it, but today is a new day.  Supposedly, Cheryl's friend mailed her a homemade necklace that said "STRAYED," but, according to Cheryl, "it looked like it said STARVED because the Y was slightly different from all the other letters," and I have so many problems with this.  If the 'Y' looked like a 'V,' the word would appear as "STRAVED," not "starved," and unless Cheryl and everyone else on the planet is dyslexic... oh, who even cares at this point.

[Blogger's Note: I tried to find a picture of this necklace and could find nothing.  The only photos that came up in my search were too distant/too blurry to make the necklace out, assuming it was even the same necklace.]

Anyway, Susanna had asked, "What does this mean on your necklace-- that you are starved?" and Cheryl decides to run with this theme because she loves writing stupid, overwrought shit.  Just wait.

Crazy Swiss Lady disappears without another word-- we don't get a description of her spiritual foot massage-- and Cheryl sits outside the co-op while trying to make us feel sorry for her again:

"And so it went, for the next couple of hours, as I hung out in front of the co-op.  I was starved.  I didn't feel like myself anymore.  I felt only like a bucket of desire, a hungry, wilted thing."


Since Cheryl is the most amazing person ever to have lived and everyone is in awe of her,

"One person gave me a vegan muffin, another a quinoa salad that had grapes in it.  Several approached to admire my horse tattoo or to inquire about my backpack."


and oh, just shut the fuck up.  First of all, her backpack should be of no interest to anyone, and second, her tattoo isn't anything to get excited about, either:

BFD.
But whatever, in Cheryl World, people just can't help themselves and feel the need to shower her with free everything and marvel at her awesomeness.﻿
Stacy shows up and Cheryl is all, 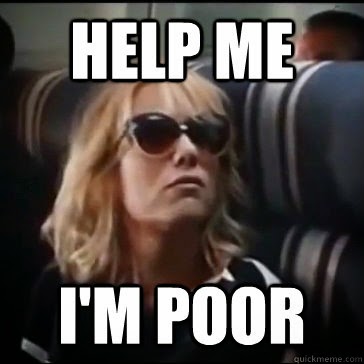 and even though Stacy offers to loan her some money, Cheryl declines and decides to check the post office one more time.  The I'm-in-no-mood-for-your-bullshit post office lady is still there and retrieves Cheryl's package.  Cheryl tries to be a bitch--

"'So it was here all along,' I said, but she didn't care, replying that she simply must not have seen it before."


--but was "too ecstatic to be angry," so she takes her package and happily skips away to the hostel with Stacy.  She checks in, makes a huge production out of taking a shower, and then spends some time checking out how hot she looks in the mirror before putting on her sexy bra and panties and omg, so hot.  She'd neglected to send herself any normal shoes and has to wear her hiking boots with her sexy new outfit, so we can only imagine that she now looks like some sort of lumberjack-hooker-- if that's a thing, and it probably isn't, but I know you're visualizing it right now and you're welcome-- but she's so breathtakingly beautiful that it won't matter.

Cheryl goes to dinner with Stacy and Stacy's friend, Dee, and I don't know where the hell Dee came from and I'm too fucking sick of this book to try to figure it out, but whatever, now there's a person named Dee in the picture and who the fuck cares because Dee goes off to sleep after dinner and we never hear about her again.  Anyway, they go out for dinner.

"At dinner with Stacy and Dee, I ordered everything I desired."


I wonder how long it's going to take her to blow every last penny of the $250 she sent herself in this package.

After dinner, she goes to a shoe store and buys some "Merrell sports sandals" and then she and Stacy go to a club where she blows more money on wine.  Stacy leaves because she's a real hiker and plans on heading out early the next morning, but Cheryl stays to dance and of course a man immediately comes onto her because she's so breathtaking.  His pick-up line is stupid and Cheryl is having none of it, and just when we think maybe Cheryl is starting her promised transformation-- you know, maybe this is the beginning of the "found" part from the title-- nope, she's still the same Cheryl and here we go.

Some guy who works at the club says, "Hey," and Cheryl says, "Hey," and isn't this a classic romance already.  Club employee guy is wearing a t-shirt that says WILCO on it and holy shit, Cheryl knows that band so obviously this is going to end in sex because of course it is.  Despite the music being super loud, these two assholes try to have a conversation and someone please kill me.  Wilco asks her where she's from and even though Cheryl had been all excited to be around "people who knew nothing of the PCT," she immediately tries to tell him all about the PCT as if he gives even half a shit.  He yells something back and she can't hear him over the music, but don't worry, she's still enjoying herself because of,

"the wonderful way his lips brushed against my hair and his breath tickled my neck so I could feel it all the way down my body."


Ugh.  She asks him to repeat himself so that he'll make her feel all tingly again and it turns out that he's working late but that he'd be off at eleven the following night and guess who won't be doing any hiking the next day because of this information.  She gives him her stupid name so he can put her on the guest list because apparently there are super exclusive clubs right there on the PCT.

She leaves the club and acts like a 14-year-old girl.

"I had a date.  Did I have a date?  I walked the warm streets second-guessing myself.  Maybe my name wouldn't be on the list, after all.  Maybe I'd misheard him.  Maybe it was ridiculous to go on a date with someone I'd barely spoken to and whose main appeal was that he was good-looking and he liked Wilco.  I'd certainly done such things with men based on far less, but this was different.  I was different.  Wasn't I?"

No, you're still a stupid whore.
She goes back to the hostel, gets in bed and spends an hour fondling herself and using words incorrectly.

"I lay awake for an hour, running my hands over my body, imagining what it would feel like to Jonathon if he touched it the next night: the mounds of my breasts and the plain of my abdomen, the muscles of my legs and the coarse hair on my pudenda--"


Oh, for fuck's sake.  First of all, who says pudenda.  Second, it's pudendum, you stupid asshole.  Pudenda is the plural.  [GOOD JOB YET AGAIN, ROBIN DESSER!  YOU'RE AN AMAZING EDITOR.]  She feels the "palm-sized patches" on her hips that "felt like a cross between tree bark and a plucked dead chicken" and decides,

"under no circumstances while on my date tomorrow could I take off my pants."


We'll suffer through her date in the next installment.  I know.  I'm excited, too.