Part Three of a review of "Wild: From Lost to Found on the Pacific Crest Trail," Let's Get Started


If, in the future, I were ever at a party and Cheryl Strayed happened to walk up to me and introduce herself, I would punch her right in the face.  Before you start mentally reprimanding me for that, let me explain that it would be an instinctual reflex, or something like Tourette's, and I could not realistically be held accountable for my actions.  My body knows how much my brain hates her, and it would react accordingly.  Feel free now, however, to reprimand me for saying that I HOPE I MEET CHERYL STRAYED AT A PARTY ONE DAY.

So, let's get started.

I've decided that the best way to go about reviewing this piece of shit is to just start at the beginning and go from there, chapter by chapter.

God help me, here we go.

I suppose we have to start with the title page: 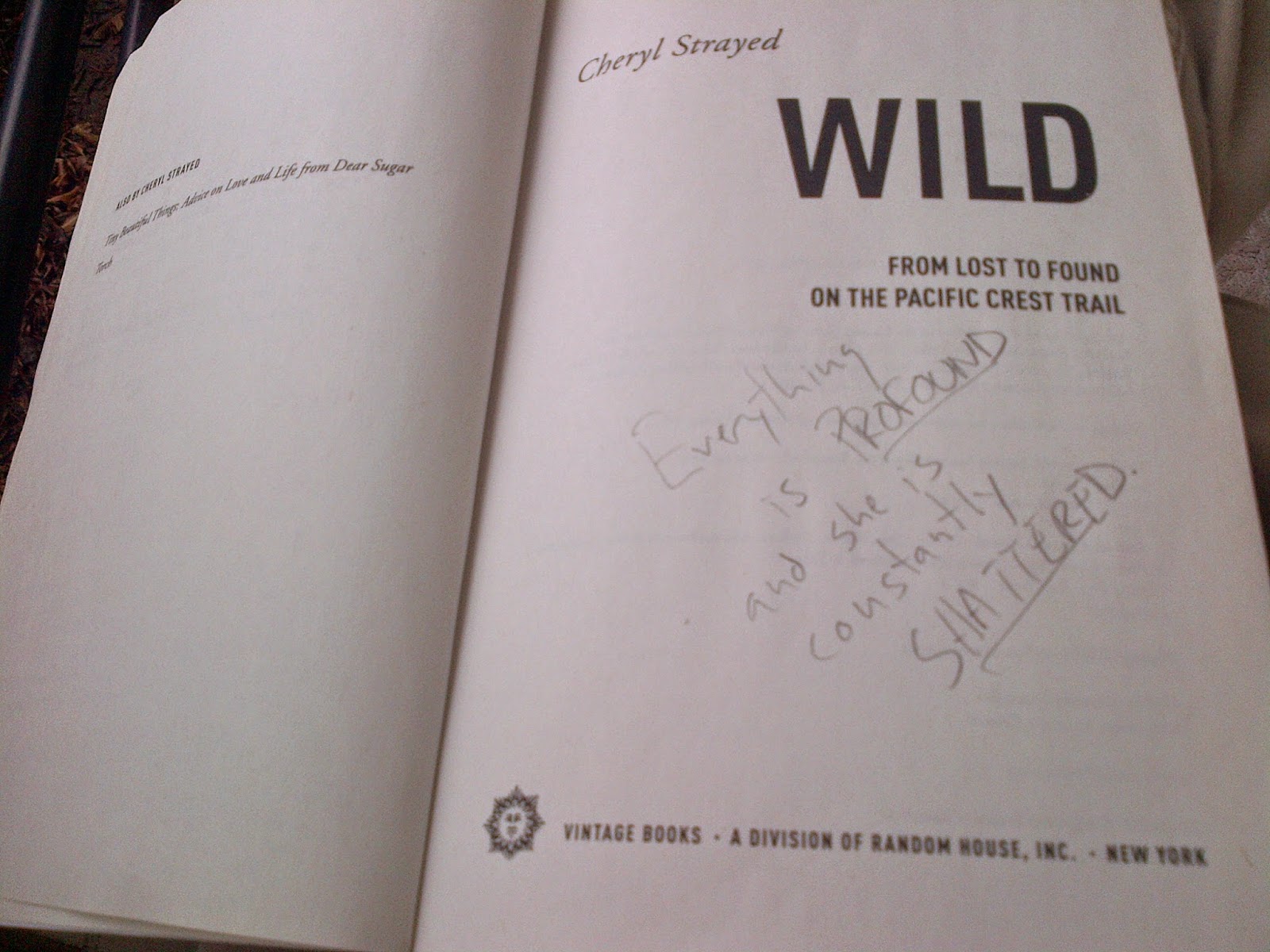 This is going to get ugly.

Chery's lack of writing ability will be addressed countless times during this review.  It should be noted now that Cheryl has a giant boner for the word "profound" and uses it with such irritating frequency that I scrawled this on the title page several months ago when my disdain for Cheryl was only in its infancy, well before I decided to create this blog.  Anyone who knows me will be able to point out to you that this is my angry handwriting.  You can tell I'm already starting to lose my shit here.

Let's turn the page to the Author's Note: 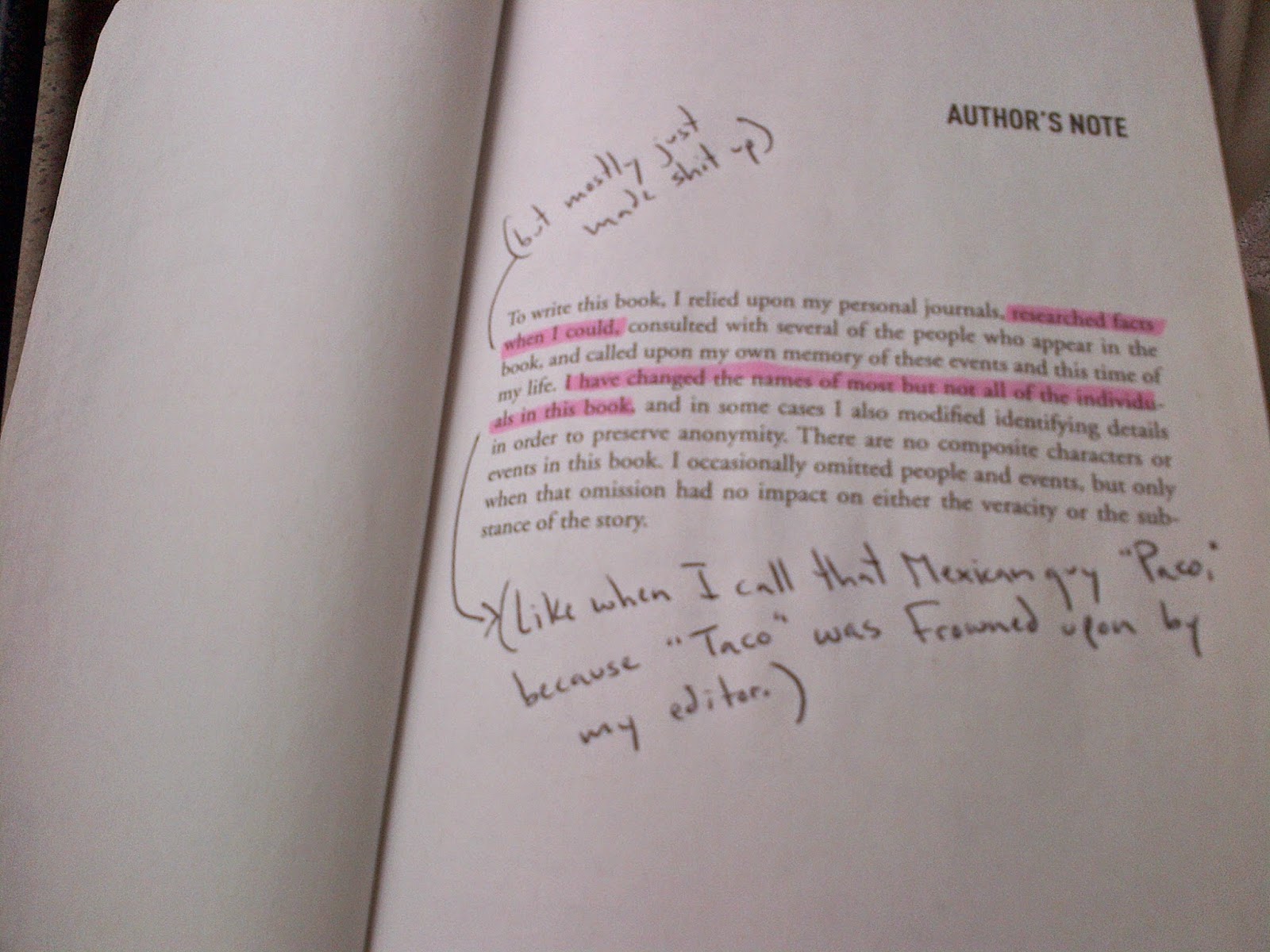 Handwriting that isn't quite so angry, note the difference.﻿

Cheryl is a blatant racist and I'll discuss this further in the future.

Also, notice that she wrote, "I occasionally omitted people and events, but only when that omission had no impact on either the veracity or the substance of the story."

"I left out all the people who were not kissing my ass and also the parts when I was totally bypassing the trail because I am a lying sack of crap and that would sort of contradict the synopsis of my book and I want to make my millions, soooooooo..... yeah, I omitted those parts."


And finally, let's get the prologue out of the way.

The prologue is meant to be a titillating cliffhanger, and it almost works (until you get to page 209 and realize that you've been fooled, or until you read the rest of the prologue and immediately realize that this woman is an idiot).

She starts her story with a very dramatic and seemingly dire account of how her boot falls off of a cliff right in the middle of her 1100-mile hike.  You, the reader, are left to wonder, "Oh my goodness, however did she manage to go on when she lost her boot??"  SPOILER ALERT: SHE HAD ANOTHER PAIR OF BOOTS WAITING FOR HER ABOUT 20 MINUTES AWAY.  You will not learn this until 206 pages later, and by then, it's too late to not read this book.  But let's get back to the topic at hand: her boot fell off of a cliff because she was a careless jackass who apparently didn't understand how gravity works (there are several instances of Cheryl not understanding how something works; this is the first example, right there on the first page).  Now, because her one boot fell off the cliff, she decided that the only logical thing to do was to *throw the other boot off the cliff* because-- and this is an exact quote-- "What is one boot without the other boot?  It is nothing."  OH MY FUCKIING GOD, ARE YOU KIDDING ME, TELL THAT TO YOUR OTHER FOOT.  Also, THANKS FOR LITTERING ON THE TRAIL, YOU ASSHOLE.

She immediately transitions into what will be the running theme of her book, and it has absolutely nothing to do with hiking the Pacific Crest Trail.  Almost like a warning, she starts in on how her mother had died-- she calls herself an orphan despite the fact that her father is still alive, which I'm pretty sure makes her NOT AN ORPHAN, but she is desperate for your pity (get used to this)-- and blah blah blah, sentence fragment, dramatic bullshit, sentence fragment, she's on the PCT.  Five paragraphs in, I had already written "First eye roll" in the margin because it was already clear that this was going to be a disaster of a book.

On the very next page, she manages to nonchalantly segue into the claim that she was a cheerleader and homecoming queen in high school (because of course she was, you don't even understand how beautiful she is yet) and in the same sentence tries to convince you that upon her admittance to college, she was a "left-wing feminist campus radical" because she has no fucking idea who she really is (or what a feminist is), but definitely knows who she wants you to believe she is, reality be damned.

She then describes her decision to hike the Pacific Crest Trail as "giving it a whirl," and I don't even think I need to explain how I feel about that.  You do not give the PCT "a whirl," unless you're Cheryl Strayed.

She wraps up the prologue with a bunch of flowery bullshit and ends it with a sentence fragment, which apparently is her signature move because almost every chapter ends like this.

Posted by Califohioan at 3:41 PM