Part Seventeen of a review of "Wild: From Lost to Found on the Pacific Crest Trail," Chapter Eight, I Wish I Could Yellow-Blaze This Chapter

Part Seventeen: Chapter Eight, I Wish I Could Yellow-blaze This Chapter


We are now in Part Three of the book, which Cheryl decided to call "Range of Light." This comes from a quote from John Muir:

"Then it seemed to me that the Sierra should be called, not the Nevada or Snowy Range, but the Range of Light."


John Muir was a totally amazing hiker, wilderness enthusiast, environmentalist and overall kick-ass fellow who has a stretch of the PCT in the Sierra Nevada named after him-- The John Muir Trail-- and this is exactly the stretch of trail that Cheryl is about to yellow-blaze the shit out of, so I don't understand why she's going out of her way to point out this section of the trail.

Chapter Eight is called "Corvidology" because she eventually has a super deep conversation that never happened with some lady in a casino bathroom about the symbolism of crows and no, but we'll get to it later.


I hate this chapter.  If, for whatever crazy reason, you ever decide to read this piece of shit book, this will be one of the chapters that you will likely just skim or skip because there's nothing good about it, but there's also nothing blaringly horrible about it and the fact that I have to review it anyway makes me want to kill myself.


I got myself into the mess, though, so I will soldier through.  I will tell you that I feel like this is slowly killing me.

Fuck me right in the face, let's get this over with.


GAAAAAAAAAAHHHHHHHHHHHHH, she walks with Doug and Tom for the first quarter mile upon leaving Kennedy Meadows and then lies about something to make them continue on without her and I find it very suspect that she constantly finds reasons to hike alone-- especially around the parts of the trail that are easily accessible by car.  Whatever, though, she wants to be alone and writes a whole flowery paragraph about how she's alone in the world and 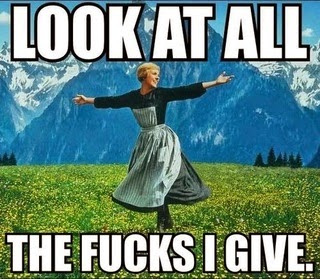 
She catches up with Doug and Tom at some point, they share some beer with her and,

"As we drank, I wondered which one of them had taken the eleven ultrathin nonlubricated Trojan condoms I'd purchased in Portland a few weeks before.  It seemed it had to be one of them."

Shut the fuck up already.  No one cares.
The next day, she comes across a small patch off snow and makes it seem like this:

--and I can't even.
She then refers to Wikipedia once again to give us all sorts of PCT details that will soon allow her to justify her decision to skip the most beautiful part of the PCT.
She catches up with Doug and Tom again and tells them that she's going to bypass The Range of Light, and they offer to take her with them on the trail.  She declines because of course she does.  She spends the night camping with them and can't stop thinking about how much she wants Doug to bone her, and that's that.
The next afternoon, Greg catches up with her and makes all of her dreams come true by saying that he's going to bypass the mountains, and this makes Cheryl feel like less of a fraud because she's already decided to skip the hard part, too.  A lot of stupid nothing happens and then Cheryl and Greg are on a bus to Reno.  Cheryl can't sleep because she can't "sleep in a moving vehicle," then takes a financial inventory and comes to the conclusion that she's just about broke.
They get to Reno and have an hour to kill before the next bus to Truckee leaves, so Cheryl blows a whole seventy-five cents on a slot machine and is just devastated when she doesn't win anything.  Greg, who clearly thinks she's a dumbass for doing this, gives her an "I-told-you-so smile," but Cheryl tries to defend herself:

"'Hey, you never know,' I said.  'I was in Vegas once-- just passing through a couple of years ago-- and I put a nickel in a slot machine and won sixty bucks.'


Cheryl goes into the casino bathroom and-- it is 4am at this point, it should be noted-- some lady decides to have a full blown spiritual conversation with Cheryl about the black feather she's crammed into her pack because no, this never happened.  Any lady in a casino bathroom at four in the morning is not going to give a shit about anything other than blowing what's left of her life savings out in the casino and is not going to stop to have some bullshit conversation about a feather.  But this is what supposedly happens, and no it doesn't.

I don't even have it in me to relay the entirety of this conversation to you; just know that super-wise casino-bathroom-lady says that a feather from either a raven or a crow is a "symbol of the void," and I hate this so much.

"'It's a good thing,' she said.  'It's the place where things are born, where they begin.  Think about how a black hole absorbs energy and then releases it as something new and alive.'"


Oh, holy fuck, Cheryl is so special and we already knew this and I can't take this much longer.

Blah, blah, blah, Cheryl and Greg make it to Truckee and then eventually manage to hitch a ride to Sierra City.  They get rooms at a hotel, Cheryl thinks about banging Greg, doesn't, takes a bath, complains about all of her physical problems and then blows the last of her money on dinner.  She now has sixty-five cents to her name and boo-fucking-hoo.  Then we have to suffer through several pages of a flashback to when Cheryl was seeing a therapist and we get to hear about all of her daddy issues and I'm not going to justify this nonsense with a single word.  It's everything you would expect it to be, the end.
And thank fucking god, that's the end of Chapter Eight.
﻿
﻿
﻿
Posted by Califohioan at 11:06 AM