Part Seven of a review of "Wild: From Lost to Found on the Pacific Crest Trail," Chapter Three, The Bullshit Gets Real


Chapter Three is called "HUNCHING IN A REMOTELY UPRIGHT POSITION," because Cheryl doesn't understand the definition of 'hunching' and doesn't realize that this phrase is redundant.  She also thinks that this a very clever thing she's written (she probably thinks it's a profoundly clever thing because she's Cheryl Strayed and 'very' isn't a fancy enough word for her).  She insists on repeating this stupid phrase throughout the chapter (and again in future chapters) often enough that you'll eventually want to smack her upside the head.  We get it, Cheryl.  Your backpack was heavy.

Except you don't know how heavy her backpack is yet.  You're about to find out.

I own my sentence fragments.

Anyway, Chapter Three starts and she manages to go a whole paragraph without mentioning her dead mom, which caused me to flip the book over to make sure I was still reading Wild.  She does, however, refer to herself as "the woman with the hole in her heart" so we won't forget how fragile and damaged she is.

"I could feel myself disintegrating inside myself like a past-bloom flower in the wind.  Every time I moved a muscle, another petal of me blew away.  Please, I thought.  Please."

Exactly, Cheryl.  Please.
She mentions how her brand new tattoo is scabbing-- "a blue horse on my left deltoid" (she has a maddening habit of using unnecessary words all the damn time; I guess just calling it her shoulder would be too commonplace for a great writer like Cheryl)-- and explains that she and her ex-husband had gotten matching blue horse tattoos in honor of their divorce AND YOU REALLY DON'T WANT TO KNOW THE SYMBOLISM OF THE HORSE, but you'll find out in Chapter Ten and then you will want to track this woman down and torture her to death.
It's nine in the morning on the day of the hike and Cheryl decides that now is finally the time to pack her fucking backpack.  I don't even.
Cheryl lists the contents of her pack in a series of run-on sentences, and I assume she does this for two reasons:  she is an awful writer, and she's hoping that maybe you won't notice how full of shit she is if she doesn't actually LIST the unbelievable amount of garbage she's supposedly carrying.  I will now go ahead and do you the favor of actually listing all of it in list form.  I have also taken the liberty to list the price of every single thing she claims to have packed because it should be taken into consideration that Cheryl was working as a waitress in the months leading up to her hike and I find it impossible that she could have afforded all of this gear.  She makes the mistake of saying that she bought the vast majority of this gear at REI, so I was easily able to look up prices.  Pour yourself a drink and get comfortable.  This is going to take some time.  Better yet, just start scrolling down and see how long it takes before you say something like, "Oh my fucking god, are you kidding me."


She also has 12 care packages that she prepared to have a friend send to her (each of which included at least $20 in cash), a plane ticket, four months of student loan payments she made ahead of time and a package of condoms that she inexplicably left off of her list.  I don't know how much her student loan payments were, nor how much she spent on the care packages or the plane ticket, but after making some estimates and calculating everything, she somehow was able to afford over THREE THOUSAND DOLLARS worth of stuff on a waitress' salary.

BULLSHIT.
She says that it took her six months to save up enough to afford all this.  I don't know about you, but I make way more than a waitress and I don't have an extra $500 sitting around at the end of every month.  As I wrote in large, angry, sloppy letters in the margin of the book, "I CALL SHENANIGANS." 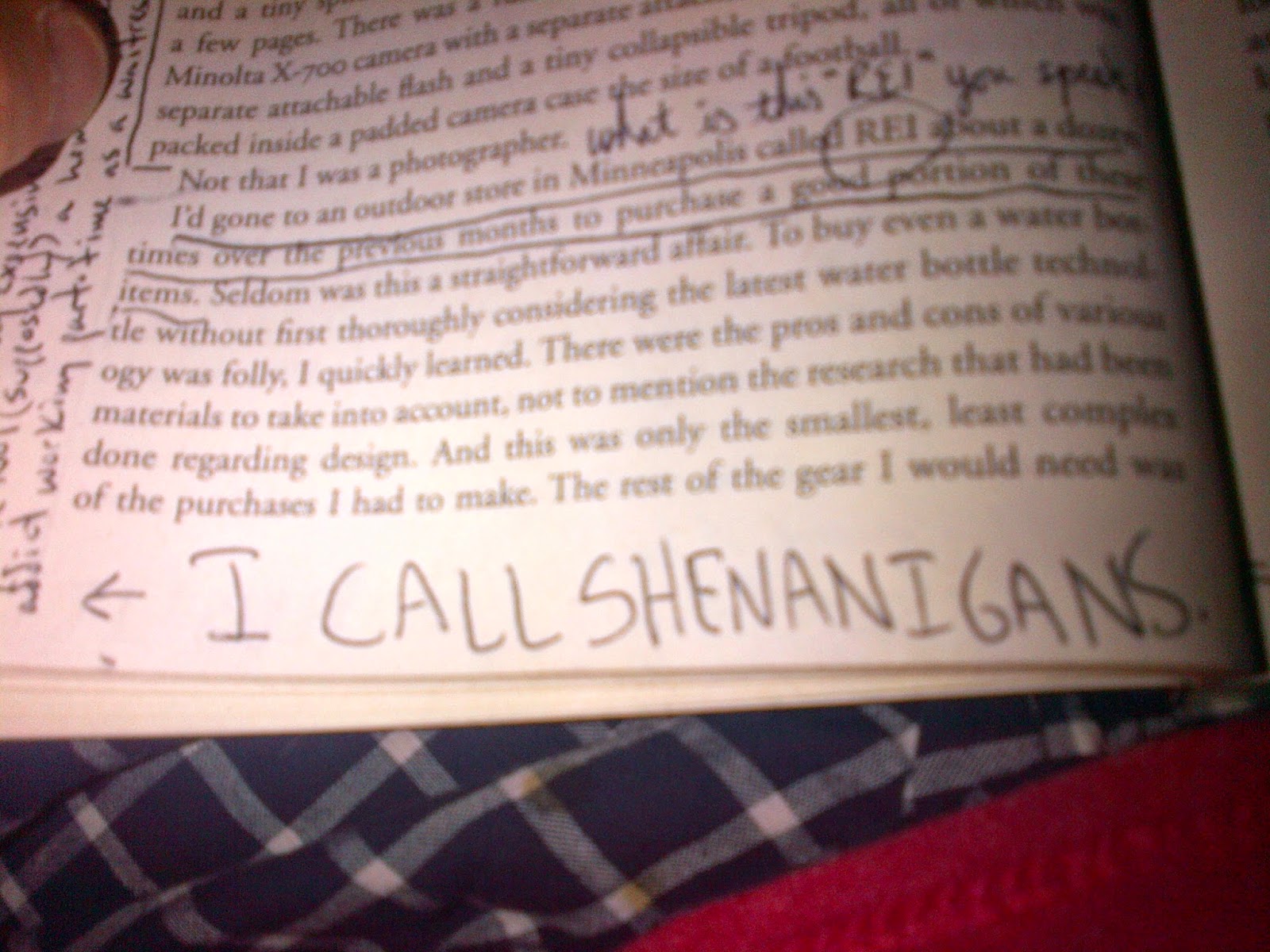 Let's move on.
She then talks about this store called REI (omg, have you heard of it?) and how every time she went there to make a purchase, the salespeople actually knew what they were talking about and were able to explain the pros and cons of every single item.

"These employees ranged in age and manner and area of wilderness adventure proclivity, but what they had in common was that every last one of them could talk about gear, with interest and nuance, for a length of time that was so dumbfounding that I was ultimately bedazzled by it."

She then writes the sentence fragment, "And their knowledge had a way of rubbing off on me."  I wrote-- again, in large, angry letters-- "NO, IT DID NOT."  She finishes this paragraph with the line, "I felt as if I'd become a backpacking expert," which prompted me to write, "YOU ARE AN ASSHOLE."

"It was only as I stood gazing at that pile of meticulously chosen gear on the bed in my Mojave motel room that I knew with profound humility that I was not."

Stop saying "profound."
She takes an unnecessary amount of time to explain how she packed her backpack and stated, "When I was done, I sat on the floor, sweaty from my exertions, and stared peaceably at my pack," which had prompted my friend Jaime to write, "Packing is hard!" which made me laugh aloud.  Then Cheryl writes,

"And then I remembered one last thing: water."

THEN you remembered water?  GFY.
Blah, blah, blah, she says a bunch of crap I don't care about, and then she says that it would take her two days to reach the first water source, 17 miles into the hike.  Never mind that it should only take one day to cover this distance, but then again, a real hiker would have left before noon.
Cheryl then admits that she will be carrying 24.5 pounds just in water.  Add that to the seemingly endless amount of crap she has crammed into her backpack, and... ugh.  She eventually makes the claim that her pack weighs "half of her weight," and I have a hard time believing that Cheryl weighs 200 pounds.  If I'm being generous, her pack weighed at least 80 pounds.  Let that sink in.  80 POUNDS.
Digression:
As I told you in Part Four, I am an experienced hiker.  When I made my San Diego to Los Angeles hike, EVERYTHING I was carrying weighed a total of 18 pounds, and this included water.  I will tell you that by the end of a 40-mile day, 18 pounds feels like a million pounds.  I will also say that in addition to being an experienced hiker, I am also an Army veteran.  I remember with extreme fondness the lengthy hikes we often made, and even as a soldier-- loaded up with a busting pack, wearing a considerably heavy bullet-proof vest and carrying an M-16-- I doubt I was carrying more than 35 to 40 pounds worth of stuff.  Cheryl is carrying at least twice that much and... no.  Bullshit.
Digression over.
She finishes packing, describes her backpack as "mildly adorable" (wtf?), and then attempts to lift it.

SURPRISE, DUMBASS!
She then repeatedly compares her backpack to a Volkwagen Beetle because again, she's profoundly clever.  She continues this comparison in future chapters because once she's written something she deems clever, she beats it to death.

"How could I carry a backpack more than a thousand miles over rugged mountains and waterless deserts if I couldn't even budge it an inch in an air-conditioned motel room?"

Don't you mean "a room with a vented white metal box in the corner?"
Volkswagen Beetle, Volkswagen Beetle, she manages to get it on her back and she's "hunching in a remotely upright position﻿," and then she breaks the air conditioner.

"By the time I was standing-- which is to say, hunching in a remotely upright position-- I was holding the vented metal panel that I'd accidentally ripped loose from the cooling unit in my efforts."

"You gonna pay for that?" -- Jaime
No, she's not gonna pay for that.  She makes a half-assed attempt to fix it, gives up after about 0.5 seconds and decides to leave (take that, stupid front-desk lady).
Hopefully, she'll actually start walking now.
Posted by Califohioan at 3:08 PM