Let's start with the opening page of Chapter 7: 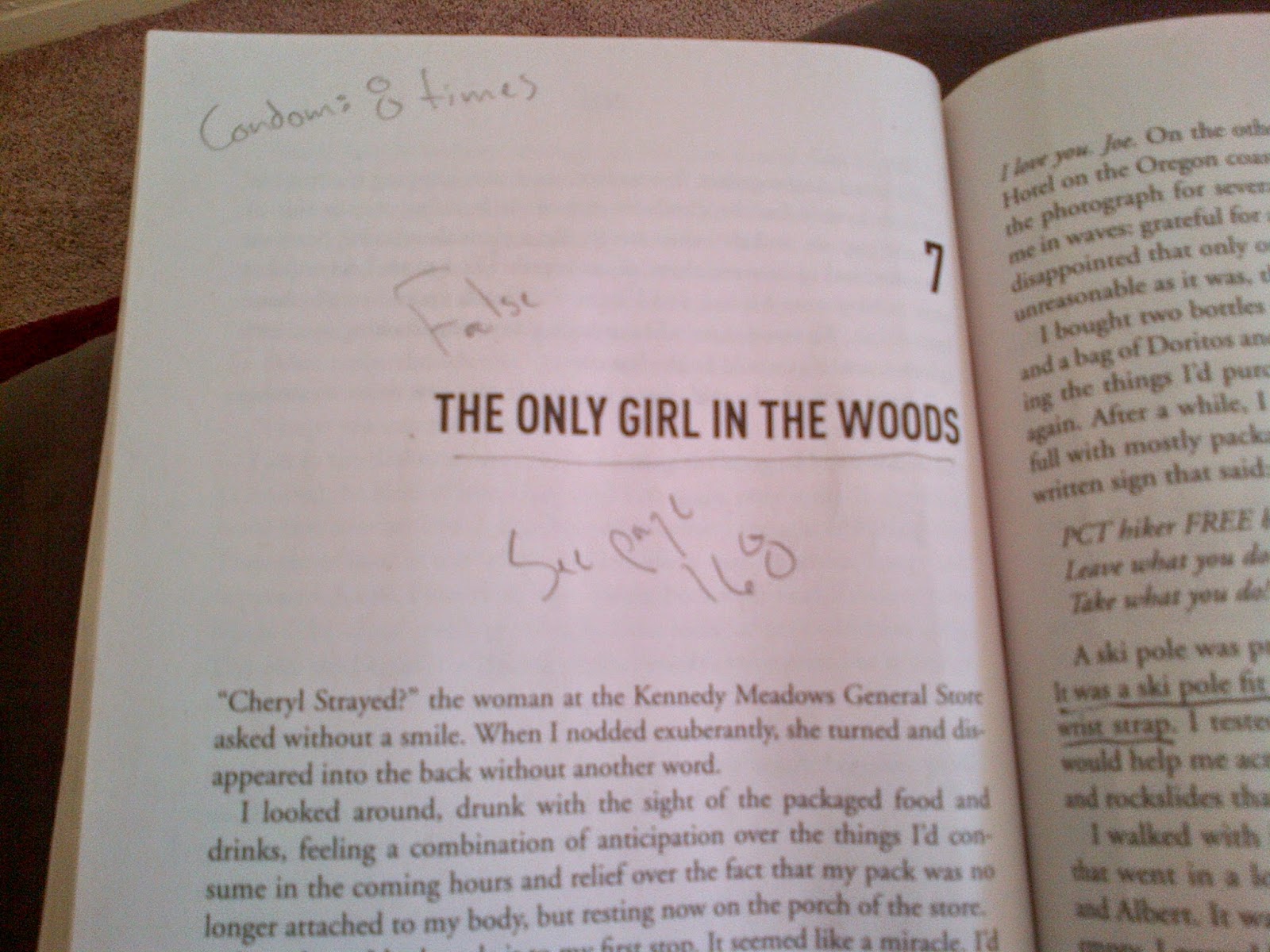 So many things to discuss.
﻿
You know that roll of condoms Cheryl "accidentally" left off of her list of crap she was carrying?  Get ready to hear all the fuck about that roll of condoms in this chapter (and again in the following chapter, for that matter).  Chapter 7 is only fourteen pages long and she manages to bring up the condoms eight goddamned times because of course she does.

Also, in one of the rare instances when Cheryl doesn't resort to naming a chapter title after either something clever that she came up with and subsequently beat to death with repetition (see: HUNCHING IN A REMOTELY UPRIGHT POSITION) or one of the totally intellectual books she's 1) reading, 2) has read or 3) has heard of at some point in her life, she opts to call this chapter "THE ONLY GIRL IN THE WOODS" even though she is decidedly not the only female hiking the PCT that year (go ahead, look it up-- the PCT Association keeps records of the trail registers-- and also, whoops, she meets other women on the trail on page 168).  SHE IS SO FUCKING SPECIAL, I CAN'T EVEN STAND IT.

Chapter 7 starts with an unimpressed woman at the Kennedy Meadows General Store retrieving Cheryl's first resupply package for her, and Cheryl is just beside herself with pride at the fact that she actually made it to Kennedy Meadows, never mind that she yellow-blazed a good part of the way there.  There was also a postcard waiting for her from the heroin-addicted almost-father of her aborted child, because nothing says 'I love you' like a 3-sentence postcard.

"I hope you made it this far, it said in a familiar scrawl.  I want to be your clean boyfriend someday.  I love you.  Joe."


Cheryl gets all mushy about this because omg a human being with a penis wrote to her, and then immediately feels some crushing disappointment over the fact that the only person who had bothered to write to her was Fuck-Up-Joe, and describes herself as "heartbroken" about the fact that the ex-husband she cheated on repeatedly had not bothered to write.  I know, I can't believe it, either.  Stupid Paul!  So insensitive!

She immediately squanders what little money she has on "two bottles of Snapple lemonade [another corporate sponsor, apparently, because she brings up Snapple lemonade all the damn time from here on out], a king-sized Butterfinger and a bag of Doritos," and just get used to her immediately blowing all of her money on stupid shit within minutes of receiving it and then also prepare yourself for the pity-party she will repeatedly throw for herself when she realizes she's broke and can't buy more things.

Leave what you don't want!

Take what you do!"


She finds a ski pole in the box and it was everything she ever dreamed of:

"It was a ski pole fit for a princess: white, with a bubble-gum-pink nylon wrist strap."

Please die right now.
She then claims that she reached the campsite-- which was three miles away-- in an hour and again, the math just doesn't add up because if it takes her an entire day to walk 9 miles, a 3-mile hike should have taken her several hours, but then again, she had her princess ski pole and "felt electric with sugar and the victory of arriving," so I guess that makes total sense and no, it doesn't.
Wait.  Maybe I'm misinterpreting something.  I can't tell from her awful writing.  You tell me, because this is what she wrote, referencing the ski pole:

"I walked with it an hour later as I made my way along the dirt road that went in a loop around the campground,"


Does she mean that she loitered around the General Store for an hour and then headed off to the campsite?  Or did she reach the 3-mile-away campsite in an hour?  If I were forced to guess, I'd choose the former, but again, her editor is a jackass and now I don't know how to interpret this.  Also, I don't care because everything that comes out of her mouth is a lie, so I guess it doesn't matter.

(I will have you know that I am now only halfway through the second page of Chapter 7 and I have written almost three times as much as Cheryl.  While you may be enjoying this, please try to calculate how much of my life I am wasting by reviewing this awful piece of shit, divide by whatever, multiply by X and come to the mathematical conclusion that I should kill myself right now as penance for starting this stupid review in the first place.  Yeah.  Math just happened.  FML.)

Oh, god, she finally reaches the campsite at whatever time and I don't even care at this point, and a man named Ed is sitting there waiting for her.

"'You must be the famous Cheryl of the enormous backpack,' he called to me."

If she strokes her own ego any harder, it will ejaculate all over the place.
Turns out that Andy and Opie have (shockingly) arrived ahead of her and told Ed that she would be arriving, and omg, get ready to be super impressed, SHE BEAT DOUG AND TOM TO THE CAMPSITE.  Ed, a person who is commonly known as a "trail angel" (a term Cheryl has never heard before, I know, I can't believe it, because she's such a backpacking expert), is waiting with food and company and makes a huge meal for her, which she devours while once again neglecting to express one iota of gratitude because it's almost as if she just plainly expects the entire world to go out of the way to treat her like the princess she is and I want to bitch-slap her right across the face.
Andy, Opie and Greg finally arrive and Ed says, "Look here, fellas, we all lost the bet," because they apparently had been betting on who would arrive first-- Cheryl or Tom & Doug-- and you're not going to believe it, NO ONE HAD BET ON CHERYL.  Greg, good guy that he is, lies right through his teeth and this happens:

"'I didn't lose!" Greg protested as he came close to squeeze my shoulder.  'I put my money on you, Cheryl,' he insisted, though the others disputed his claim."

My brain is socked in right now, maybe I should just give up.


Blaaaarrrgh, everybody suddenly leaves to go take naps and that leaves Cheryl alone with her stupid resupply package and she goes Full Cheryl about it:

"The things inside smelled like a world far-off, like the one I'd occupied in what seemed another lifetime, scented with the Nag Champa incense that had permeated my apartment.  The Ziploc bags and packaging on the food were still shiny and unscathed.  The fresh t-shirt smelled of the lavender detergent I bought in bulk at the co-op I belonged to in Minneapolis.  The flowery cover of The Complete Stories by Flannery O'Connor was unbent."

Thanks for permanently ruining Nag Champa for me, asshole.
Awesome.  Another useless book to carry.
I can't take anymore today.  We'll explore the condoms more tomorrow.
Posted by Califohioan at 4:24 PM