Part Eleven of a review of "Wild: From Lost to Found on the Pacific Crest Trail," Chapter Six, Part One: She Doesn't Understand How Lying Works

God help us all, Chapter Six opens with this:

Please tell me that she's talking about actual licorice.
They drive to Frank's trailer and he goes inside to let his wife, Annette, know that she will have to cater to Cheryl's every need for the evening.

"A few minutes later they emerged together.  Annette was plump and gray-haired, the expression on her face unwelcoming and suspicious. 'Is that all you got?' she grouched as Frank pulled my pack from his truck.  I followed them inside, where Frank immediately disappeared into the bathroom."

Probably to wash off his licorice.
I already like Annette because she is clearly unimpressed with Cheryl and seems irritated by her presence.  She makes dinner for Cheryl while the television blares in the corner of the trailer and there's another news story on about the O.J. Simpson trial.  I really don't understand why Cheryl feels the need to bring this up.
Even though Cheryl hasn't bathed in over a week, she decides not to wash her hands before eating, and-- selfish bitch that she is-- does not bother to express any sort of gratitude to the woman who is feeding her.  Instead, she starts shoveling food into her gaping maw and, in between bites, lies to her hostess about how she's a college graduate even though "it was technically a lie."  Cheryl then explains to us-- not to Annette-- that she almost graduated from college, but didn't because... wait for it... OMG HER MOM DIED, HAS SHE MENTIONED THIS YET?  Now, before you start thinking that I'm a heartless douche, let me explain that Cheryl didn't really drop out of college because her mom died-- that would almost be understandable-- but she's still going to blame it on her mom because she can't take responsibility for any of her own actions.  I'll let Cheryl explain:

"I did not receive my degree because I'd failed to do one thing.  I had not written a five-page paper for an intermediate-level English class."


This makes NO sense whatsoever because what the hell was Cheryl "Hemingway" Strayed doing taking an "intermediate-level English class" at what should have been the end of her college career?  And why, for fuck's sake, was she unable to write a five-page paper?  Jesus Christ, an illiterate chimpanzee could have written a five-page paper on the bus ride to the campus, but Cheryl flushes her college diploma down the toilet over this one little thing, and NO.  I just can't accept this explanation.  I don't even know what more I can say about this, and neither does Cheryl, so I will move on.

Clearly, there was no ass-kissing going on at Frank and Annette's place because she doesn't say anything else about her stay, nor does she even once hint that she thanked them in any way.  It's already morning and Frank is dropping her off at a convenience store.  She starts hitchhiking again because "that's what hikers do" and finally catches a ride with a man who was obviously white because she doesn't describe him in any way.  He drops her off at an outdoor supply store so she can get her stupid stove fixed and then she heads to a restaurant:

"[I] ordered a chocolate malt and a cheeseburger with fries, feeling as I had at dinner the evening before: shattered by each delicious bite."

Here we go with "shattered."  Hope you like that word, because Cheryl sure does.
As she's deciding whether to start hitchhiking again or stay the night at a motel, "a scruffy-looking man" rode up to her on a bicycle.  This is the only white man in the entire book who Cheryl does not immediately want to bang or at least even consider banging. Apparently, he looks homeless and he smells.  Even a whore like Cheryl has standards.
He is harmless, friendly and tries to be helpful-- even offering her food-- and Cheryl responds to his kindness by being a self-righteous, condescending bitch because she's Cheryl Strayed.

She finds a motel and the man behind the desk, Bud, immediately starts kissing her ass because she's so amazing and then insists on washing her clothes for her.  She goes to her room to take her clothes off and returns to the motel office with her pile of stank.

"'It's 'cause I like your bracelet.  That's why I offered,' said Bud.  I pulled up the sleeve of my raincoat and we looked at it.  It was a faded silver cuff, a POW/MIA bracelet my friend Aimee had clamped onto my wrist as we said goodbye on a street in Minneapolis weeks before."


Oh, I don't even have words. Just... furious... right now.  She goes out of her way to explain that her friend Aimee had "worn the bracelet for years without ever taking it off," and then goes on to say,

"Since the moment she'd given it to me, neither had I."

HOLY SHIT, A WHOLE FEW WEEKS, YOU SURE DO LOVE THE TROOPS.
Bud explains how he's a Vietnam veteran and then says a bunch of stuff that doesn't make a lot of sense, and then this happens:

"There was a cigarette burning in a plastic ashtray nearby that Bud picked up but didn't bring to his lips.  'So I'm gonna assume you know there's a lot of snow up there on the Sierra Nevada this year.'

WHAT.
Here we go again with Cheryl not understanding how something works and also how she did not bother to look into weather conditions before starting this hike.  She is shocked about the prospect of *snow on mountains.*
She goes back to her room to take a shower and a bath, then lies down and starts reading Faulkner's As I Lay Dying-- one of the five books she's carrying because she doesn't want you to forget how well-read she is-- before the concept of snow hits her again.

"I knew snow.  I had grown up in Minnesota, after all.  I'd shoveled it, driven in it, and balled it up in my hands to throw.  I'd watched it through windows for days as it fell into piles that stayed frozen for months on the ground.  But this snow was different.  It was snow that covered the Sierra Nevada so indomitably that the mountains had been named for it-- in Spanish, Sierra Nevada means 'the snowy range.'"

"Thanks, Dora." --Jaime
Blah, blah, blah, she copies some stuff from Wikipedia about the Sierra Nevada range and omg, she's just so knowledgeable.  She then calls the Bureau of Land Management to learn how snow works.

"'Oh, yes, there's lots of snow up there,' said the woman who answered.  She didn't know the specifics, she told me, but she knew for certain it had been a record year for snowfall in the Sierras.  When I told her I was hiking the PCT, she offered to give me a ride to the trail.  I hung up the phone feeling more relieved that I didn't have to hitchhike than worried about the snow.  It simply seemed so far away, so impossible."


She then assumes that you're a fucking idiot and gives a recap of how awesome she is at hiking, at one point making the claim that in the past few days she had "ascended and descended countless mountains" and no she didn't because Cheryl doesn't know the difference between a mountain and a hill.  And she'd done all this super amazing stuff with "a pack that weighed more than half of what [she] did."

Blaaaaarrrrggggggg, more overwrought crap and then BLAM my personal copy of this book just blew the fuck up with margin notes because I am familiar with math and I don't think Cheryl was counting on this. 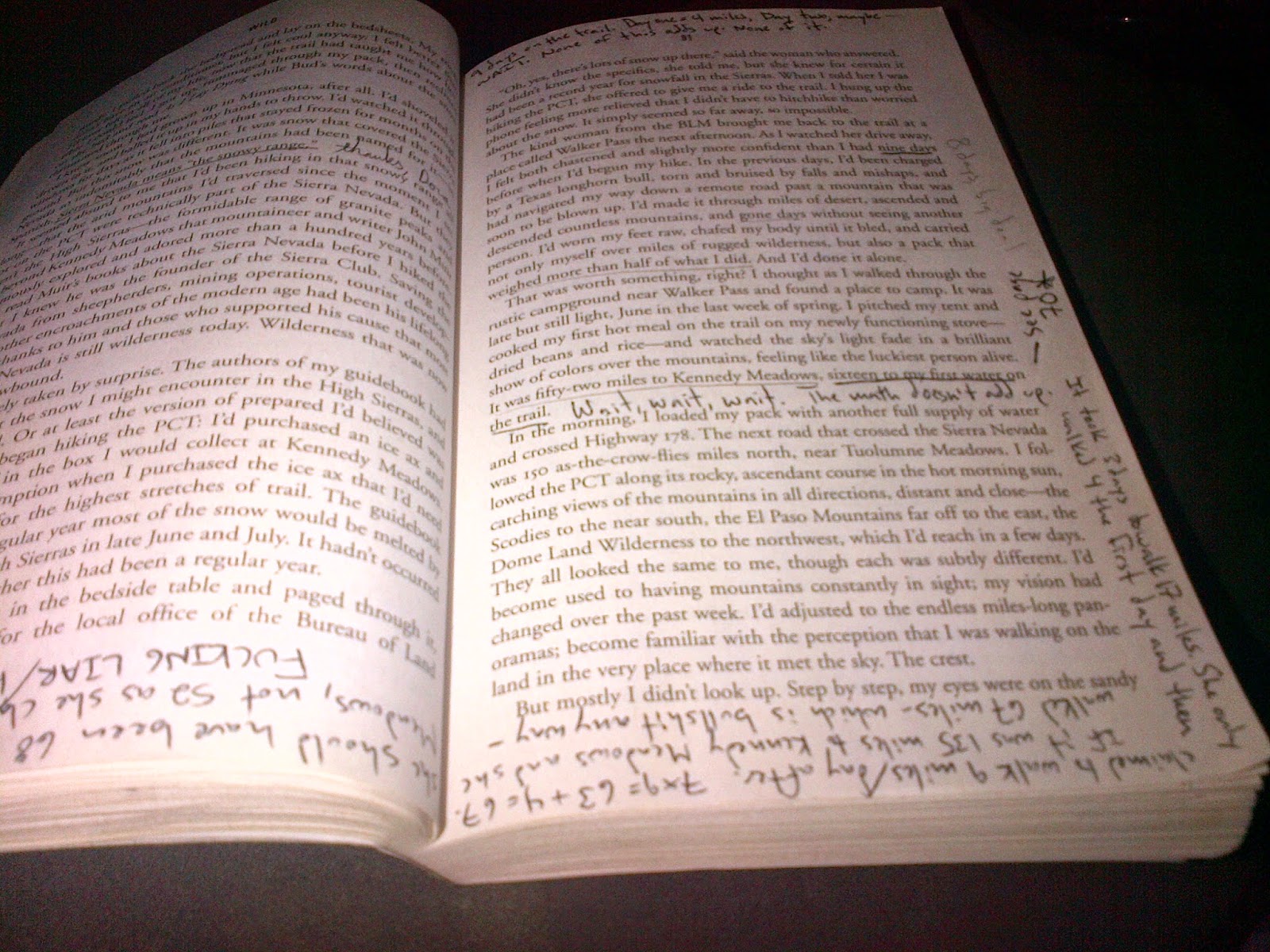 Uh-oh, here comes some fact-checking.
Cheryl says that she is now 52 miles from her first resupply box which, on page 70, she had said was 135 "trail miles" into her hike.
Wait a minute.
We know that it took her 3 days to walk the first 17 miles.  On days four, five, six and seven, she claims that she was walking 9 miles a day, and even though I don't believe that for a second, let's just go with that.  On the morning of day eight, she left the trail to go hitchhiking.  Let's add this up.
17+9+9+9+9= 53 miles.
If, at the start her hike, she was 135 miles away from her first resupply box, she should be 82 miles away from this resupply box, not 52 miles.  She has just unintentionally admitted that she skipped 30 miles of the trail.
FUCKING LIAR.
That's all I can muster today-- math is hard!  We'll continue on with Chapter Six tomorrow.
﻿
Posted by Califohioan at 9:11 PM