Part Eighteen of a review of "Wild: From Lost to Found on the Pacific Crest Trail," Chapter Nine: Cheryl Continues to Not Understand Things

Chapter Nine finds Cheryl fresh off the bus in Sierra City, having just skipped 450 goddamned miles of the PCT because it was going to be too hard.  She claims 1) that her new final destination, The Bridge of the Gods, is 1008 miles away and 2) she has already hiked 170 miles.

There are these things called maps.  Everyone can buy them, but not everyone can use them properly.  Maps are crazy like that.

First of all, The Bridge of the Gods is 957 miles away, not 1008.  Second, she is still insisting on claiming the 30 miles she yellow-blazed from Ridgecrest to Walker Pass (remember how the BLM lady gave her a ride?  I remember).  She has not hiked 170 miles. 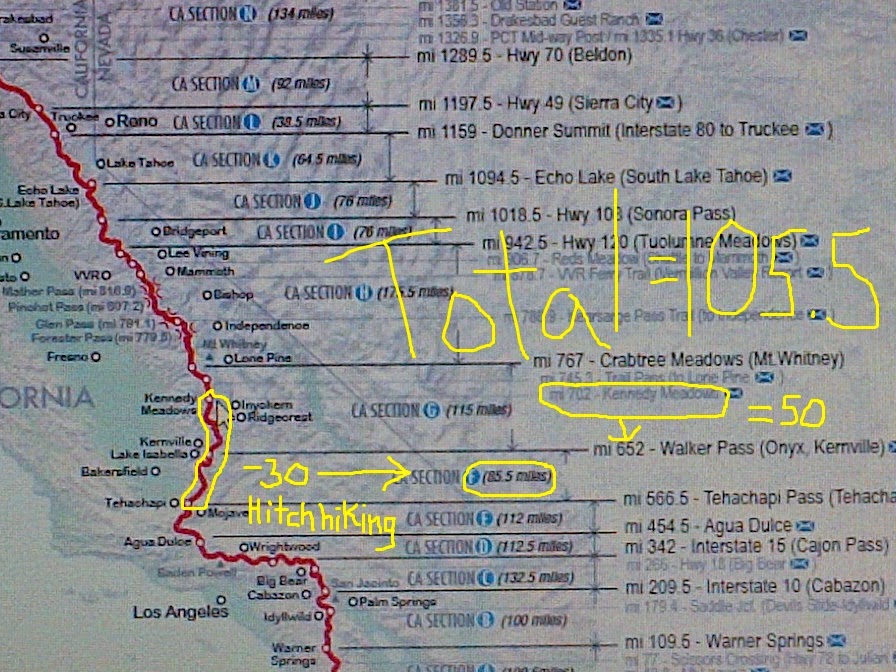 Hey, look.  A map.
By my calculations, she hiked (supposedly) 105.5 from just outside Mojave to Kennedy Meadows, and another 39.6 miles from Kennedy Meadows to Trail Pass Trail, where she got off to catch a bus.  That comes to a grand total of 145.1 miles-- NOT 170.  The math still doesn't quite add up because Cheryl is full of shit and god knows just exactly how many miles she's actually hiked at this point, but just for giggles, let's go with 145.1 which, it should be noted, has taken her THREE GODDAMNED WEEKS to cover.  It took me two and a half days to walk 120 miles, so... GOOD JOB, CHERYL.  YOU'RE CRUSHING IT.
She says goodbye to Greg and it goes just about how you'd imagine it would, full of eyes meeting and hard embraces and oh, go fuck yourself.  Alone again on the trail, she soon encounters more snow and then, motherfuckingfuckfuckfuckfuckgoddamnit, you stupid waste of carbon and air, she says,

"I didn't have my ice ax any longer.  I'd left it that morning in the PCT hiker free box at the Sierra City Post Office as Greg and I strolled out of town.  I didn't have the money to mail it back to Lisa's, much to my regret, given its expense, but I wasn't willing to carry it either, believing I'd have no use for it from here on out."  [emphasis mine]

SHE REALLY DOESN'T UNDERSTAND ANYTHING.

There are so many points in this book when, upon even attempting to understand what the fuck was going on in her brain, this is what happens to me:

I'm so tired of cleaning my walls.
This asshole is carrying how many books, but she isn't willing to carry the weight of something that could possibly save her dumb fucking life because of course.  I checked the REI website for ice axes, and the cheapest one I could find (the one I assume Cheryl would have bought) weighed a grand total of 452 GRAMS.  That's NOT EVEN ONE POUND, and she couldn't be bothered to carry that totally useless extra weight.  Unfuckingbelievable.  Why can't she just die.
So ermahgerd, there's still snow and shit-- who would have even guessed-- and she's trying to cross it, it isn't going very well and then damn the bad luck, she drops a nickel of the sixty-five cents she has left into the snow, can't retrieve it and cue Full Cheryl Meltdown.

"I remembered the nickel in Vegas, the one with which I'd played the slots and won sixty dollars.  I laughed out loud thinking about it, feeling as if these two nickels were connected, though I couldn't explain why other than to say the daffy thought came to me as I stood there in the snow that day.  Maybe losing the nickel was good luck the same way that the black feather that symbolized the void actually meant something positive.  Maybe I wasn't really in the very midst of the thing I'd just worked so hard to avoid.  Maybe around the next bend I'd be in the clear."

Maybe you just dropped a nickel.
She thinks she might be lost because the snow is covering the trail, tries to use her compass and fails and YOU'LL NEVER GUESS WHY.

"I tried to remember all I could from Staying Found, which I'd burned long ago."


She burned a book she never really bothered to read/understand in the first place-- a book that, like the ice ax, could very well could have meant life or death on the trail.  I'm sorry, but this is gonna happen again:

I'm just gonna paint my walls red.
What the fuck is wrong with her, and why do so many people think she's an inspiration.  Really.
She then says this thing:

"I'd never had a mind for math.  I simply couldn't hold the formulas and numbers in my head.  It was a logic that made little sense to me.  In my perception, the world wasn't a graph or a formula or an equation.  It was a story."

I should stop putting my head back together and save us all from the rest of the book.
She then tries to be super clever by composing a mathematical word problem and it's too stupid to even bother quoting because it doesn't make any sense and omg, she's so amazing and brave and such a great writer, I <3 this book so much.
She has another clumsy flashback to remind us about how she was totally hardcore into heroin and how everyone was totes worried about her, then spends an entire paragraph pointing out what a victim she is because nothing is ever her fault.
Blah, blah, blah, more shit I don't care about and then-- I feel like there should be a theme song at this point-- it's another episode of Identifying Animals with Cheryl, and this time it is a fox.  She almost shits her pants due to her completely irrational and unnecessary fear of animals and fights "the urge to scramble to my feet and leap behind the tree for protection" because she doesn't understand how foxes work.
"Or trees." --my sister, Sienna﻿

"'Fox,' I whispered in the gentlest possible voice I could, as if by naming him I could both defend myself against him and also draw him nearer."

I--- what?
The fox is having none of this and immediately decides to get the hell away from her and then,

What the fuck.  I'll spare you another insertion of the exploding-head guy.  But know that my brains are all over the wall again.

Blah, blah, blah, she claims to have covered more trail than she has, admits that she's running low on food because she doesn't understand how math works and hitchhikes to the next town.